“”How can we fight the French, Prince?” said Count Rostopchin. “Can we arm ourselves against our teachers and divinities. Look at our youths, look at our ladies! The French are our Gods: Paris is our Kingdom of Heaven.””

It is 1805 and Russia and France are about to go to war. In the Rostov household, they are concerned about three things; money, marrying off their children and war. The Bolkonskys’ estate is out on the countryside where the old Prince holds the rest of the family in a tight clutch. Pierre Bezukhov is the illegitimate son of one of the richest counts in Russia, and he unexpectedly inherits the money and climbs on the social ladder. He marries one of the important ladies, Helene Kuragina, but the marriage is colder than ice.

Napoleon and his army destroy the Russians, and even the aristocracy suffers horrible losses. The war changed the lives of the noble families, and they lived through tragedies, but also had some happy moments during the war.

War and Peace is said to one of the best novels ever written. I cannot say that I agree, although I really enjoyed the story. But the bloody philosophical essays in between, and especially in the final epilogue. That really ruined the book for me. And Tolstoy sure takes his time to get to the point, and I believe that it would have been a lot better if only he had a strict editor. If you plan to read it, I suggest you go for a good edition which has put all the essays in an appendix.

But luckily, Tolstoy’s genius shines through, and those parts which deals with family life, and especially love, are brilliant and as good as Anna Karenina. I just wish he would have kept to those subjects, as the strategies and details about warfare don’t interest me at all. I do, however, see why many men list this as their favourite book. I’m just glad that I can tell the world that I have read War and Peace.

This was September’s read in Line’s 1001 books reading challenge (and yes, I needed another week to finish it).

“They used to deliver newspaper like potatoes to the company stationed out in the steppe: a month’s worth at a time, or two, or even enough to see them through to spring, so as not to waste fuel and not to pamper the unit.”
Khabarov is the captain of the 6th regiment far out on the Kazakh steppes. Surrounding their camp there’s nothing as far as the watch towers can see. Food is always scarce, so when the captain gets the brilliant idea of planting the potatoes instead of eating them, he reckons he has solved their food shortage. But this is Soviet where no one does anything without a permission from someone above them in the system, so Khabarov soon finds himself in serious trouble.
My first reaction after reading it was: all that trouble because of potatoes? Second: what the hell did I just read? Definitely too much confusion and those Russian names I never can tell apart, made this a hard one. Yet there are definitely good parts and some parts had me snickering. And I do have a feeling that this will get better with a second read. It is the first book in a trilogy, and I do hope that And Other Stories is going to publish the other ones as well, as it has received grand reviews and prizes, not only in Russia, but also abroad.
June 24, 2012July 15, 2018 ~ Monika ~ 3 Comments
Anna Karenina by Leo Tolstoy (1877) 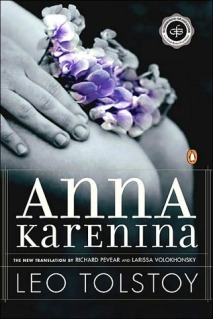 “All happy families are alike; each unhappy family is unhappy in its own way.”
Anna Karenina is the unhappy wife of Karenin and the devoted mother to their son. But then she meets Count Vronsky who takes her by storm and she gives up her family and her place in society to be with him.
The extended family of Anna are also important characters in this excellent 800+ pages long Russian classic. I fell in love on the first page and the love lasted until the last page. Or maybe not entirely until the last page, because all the religious doubt was too much.
My favourite character must be Levin, a friend of Anna’s brother and the suitor of his wife’s sister. I can’t really pinpoint why, but he seemed like a sincere character all through the book. All the other intrigues in the extended family and their friends’ lives are all so excellently explained. The only thing I was really curious about was what Dolly’s daughter had been doing with the raspberries. It must be something naughty as it wasn’t in the book!
I’m sure there’s so much to be said about this book, but the most important thing is that I loved it so much that it will be up there amongst my favourite books. I’m also excited about the new film version which comes out later this year.
This was June’s book in Line’s 1001 books reading challenge, to see what other Norwegians say about it, go here.
May 12, 2012July 15, 2018 ~ Monika ~ Leave a comment
Happiness is Possible by Oleg Zaionchkovsky (2010)

“Suddenly I was swamped by the noise of the city, as if someone had jacked it up to full volume. Leading the acoustic assault with its screeching and howling was a trolleybus, followed by a tumultuous herd of invisible cars, roaring and snarling in every possible register. Birds’ wings started clapping, music stared playing, invisible crowds of people started babbling and scraping their feet. We were in Moscow.”
A writer is residing with his dog, Phil, after his wife, Tamara, suddenly divorced him. Yet, he sees her and her new man all the time. He is struggling with writing his next book and spends his days wandering around Moscow, going to the datcha and drinking too much alcohol. In this way he meets many interesting people who gets a space in his narrative.
I’m torn between really liking this book and it being just an okay read. I really enjoyed reading it, but then an hour later I can’t hardly recall anything from it. Does the writer even have I name? I can’t remember. But I know that I read most of it with a smile, and sometimes even laughed out loud. Because the old writer’s observations and stories are funny.  And somehow it moves, but slowly, forward. But I guess I’m really not that impressed.
This was the first book of the year published by And Other Stories which I started subscribing too. There’s something special seeing your name in the back of the book and knowing that my book is special because it’s numbered.