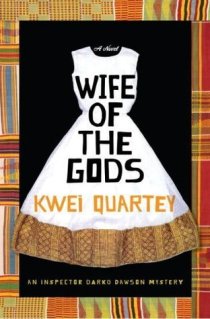 “She clashed badly with Bedome’s head priest—name’s Togbe Adzima—over this trokosi business. Have you heard about it, Inspector Dawson? These women they call trokosi? Supposedly wives of the gods serving at a shrine as penance for a family crime? They’re often brought to the shrine as girls as young as nine, and once they reach puberty, the fetish priests begin to have sex with them.”
Darko Dawson is a CID inspector in Accra, Ghana. He is called out to a small town, Ketanu, to solve a murder. A medicine student, Gladys, was found murdered in the forest between Ketanu and a even smaller community. Gladys was going around to small communities to inform about AIDS. The local police has already suspect a young boy, Samuel, who was infatuated with Glady, for the murder, but Darko isn’t convinced.
Quartey has done a great job with making Dawson an interesting detective. He has some real anger issues and a bad marijuana habit. And the fate of the trokosi, AIDS and the divide between traditional and modern Ghana are some of the things that make this book work. I’m not so convinced by the writing, and the whole plot was kind of see-through. But it really had a great ending which won me over. This is the first book with Darko Dawson, and I will definitely be reading the next one as well.