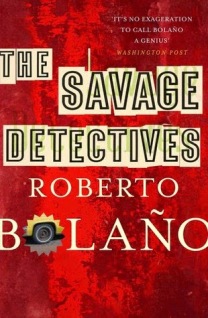 “There is a time for reciting poems and a time for fists.”
Juan Gárcia is a 17 year old, who through his diary tells the story about his meeting with the Visceral Realists, a gang of poets living in Mexico City. They usually hang around in bars, drinking and discussing books. He also falls in love with one of them, María Font, and stops attending classes at the university. Two of the most famous Visceral Realists, Arturo Belano and Ulises Lima, along with a prostitute, Lupe, and Juan Gárcia,  have to leave Mexico City on New Year’s Eve 1975 because Lupe’s pimp has found them.

The second part of the book are eyewitness accounts from around the world, spanning from 1976 to 1996. Here we learn what Ulises Lima and Arturo Belano are up to in Mexico, Europe, Israel, USA and Africa and all the interesting characters they meet on their way.  It took some time to get used to the jumping from one eyewitness to another and piecing together the story, but once I got used to it, it became addictive. 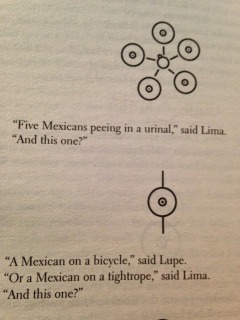 The story is interesting, but I think you have to be really into poetry, and especially Mexican, to get everything out of this book. I usually skimmed the very detailed poetry part of the book. The rest of the book was right up my alley. Arturo Belano is the alter ego of Roberto Bolaño, and most of the characters are based on real persons (Wikipedia has a nice who’s who).

I read the book as a part of a book originally written in Spanish in Bjørg’s off the shelf challenge, temporarily being supervised by Hedda. I’m about a month late for the challenge as I have been a super slow reader this summer. the Savage Detectives has been on my shelf since 2011, so about time.

“Everything that begins as a comedy ends as tragedy.”

were flying across northern Brazil in a commercial airplane. For hours and hours, they had been seeing an endless expanse of forest, all the same intense green, cut through by rivers like shining serpents. The most formidable of all was the color of coffee with cream. “The Amazon River is the widest and longest on earth; five times greater than any other,” Alex read in the guidebook his grandmother had bought him in Rio de Janeiro. “Only the astronauts on their way to the moon have ever seen it in its entirety.” What the book didn’t say was that this vast area, the last paradise on the planet, was being systematically destroyed by the greed of entrepreneurs and adventures, as he had learned in school. They were building a highway, a slash cut through the jungle, on which settlers were coming in and tons of woods and minerals were going out. Kate informed her grandson that they would go up the Rio Negro to the Upper Orinoco, to an almost unexplored triangle in which most of the tribes they were interested in were concentrated. The Beast was supposed to live in that part of Amazon.”

Alex is forced out of his comfortable life in California when his mother has to undergo chemotherapy and he has to go live with his eccentric black tobacco-smoking and vodka-drinking grandmother for a while. She is a journalist and is going to the heart of Amazon to search for a legendary creature named the Beast – not very different from the Yeti apparently, and Alex has to go with her.

The book is meant for young (13+ I would say) readers, so the language is simple, but also very detailed. The characters, from Kate, the eccentric grandmother, to the suspicious-looking Indian who was hired to fan banana-leaves for the award-winning anthropologist with a slight phobia for anything that moves. It is definitely a thrilling adventure, maybe a bit predictable for adults, but I think the target group will love it. It should also raise awareness for the environment and biodiversity. I already know which students I will recommend it to.

It is also the first book in a trilogy about Alex, the other ones are set in Asia and Africa, I had to buy them at once I found out that it was a trilogy.