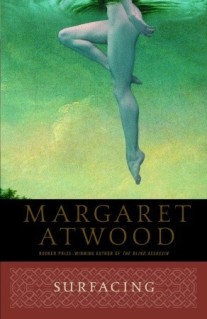 A young woman goes back to the remote community in Quebec where she grew up to look for her father who has gone missing. She brings with her her boyfriend, Joe, and an other couple, David and Anna. She hasn’t been back for years but nothing much has changed on the desolate island where just her family lived.

Going back opens a lot of wounds. The fact that she has been married before and carried a child places a strain on the current relationship. David and Anna have their own problems which surface during the stay on the remote island. The search for the father is unsuccessful and towards the end of their stay she goes feral.

This is one of those slow-reading book as there’s much to absorb from each sentence. Reading it was easy in the beginning, but unfortunately for me, I quickened the pace as it got more exciting which made it a lot harder to understand. And then it was too late and I understood nothing towards the end. I had to google it after to check if I had missing out on something (so much easier than rereading the book), and after reading this, I got a little wiser, but still have some questions.

Fourth Atwood, and yes, she is a great read, but not the easiest. I read Oryx and Crake years ago, and there the confusion was at the beginning, but once I got through many pages I understood more and more. Cat’s Eye is one hell of a book, and the Robber Bride was also good. I’m glad there are many other books by Atwood to figure out. 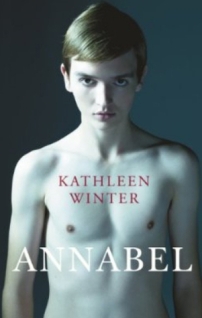 “Wayne Blake was born at the beginning of March, during the first signs of spring breakup of the ice – a time of great importance to Labradorians who hunted duck for food – and he was born, like most children in that place in 1968, surrounded by women his mother had known all married life: Joan Martin, Eliza Goudie and Thomasina Baikie. Women who knew how to ice-fish and sew caribou hide moccasins and stack wood in a pile that would not fall down when their husbands walked the traplines. Women who would know, during any normal birth, what was required.”
Wayne is not like any other newborn babies, he has a testicle, a penis, a vagina and labia. When they have to choose, his father decides that they should make him into a boy and he raises Wayne as a boy. But Thomasina, who was present at the birth, after the loss of her husband and daughter, calls Wayne for Annabel, her dead daughter’s name, when no one is around.
Wayne’s father is a man who knows everything about surviving in the wild, but he is not good at communicating with the people around him. He watches his son in fear that he turns too girly, while his mother wants Wayne to know the truth. She helps him buying and hiding a swimsuit when he falls in love with synchronised swimming.
I really enjoyed this book, mainly because the way it connects people and nature. Although sometimes the ramblings about the Labrador wilderness interfere too much with the main story, there was one part in the book where I thought get to the bloody point. But luckily it was just in one place in the book. And of course the fact that it is about hermaphrodites, something I have only come across once before in books, Middlesex by Jeffrey Eugenides. And I’m glad that I didn’t see any similarity between them. Both are amazing in their own way. (Note to self: another book I need to reread.)
And there was one point in the book where everything seemed so dark for poor Wayne and I had no possible idea how it all would turn out. And I think that was my favourite part.
July 5, 2011July 15, 2018 ~ Monika ~ Leave a comment
Nikolski by Nicolas Dickner (2005) 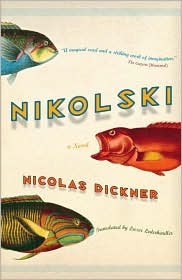 “My name is unimportant.
It all started in September 1989, at about seven in the morning.”

The first and unnamed narrator is cleaning his mother’s house after she passed away and discovers the Nikolski-compass, a compass that points at Nikolski in the Aleutian islands instead of north, the only memorabilia after his father. The second narrator, Noah, has spent his whole life in a car with his mother travelling around Canada’s midwest. His father left and spent his life on the sea, and the last postcard they got from him was sent from Nikolski. Noah leaves his mother and moves to Montreal to study archaeology. Joyce Doucette, the third narrator, grows up on an island on the Atlantic coast hearing her grandfather’s tales of their ancestors who were pirates and runs away to Montreal while she’s still in high school. There she starts working in a fish shop and steals old, broken computers at night.
This was for me the perfect portrait of modern Canada. The book goes from coast to coast and through generations of both natives and immigrants. So many places, facts and fiction squeezed into one small book. I loved the names of the chapters. The three narrators are all in the same small neighbourhood at the same time, will their paths cross? And will they discover that they are related?
Another thing that amazed me with this book was its design (fishes!) and the print it was set in. That is one experience that you won’t get when reading an e-book.
Nicolas Dickner is an author I definitely want to read more from.
April 18, 2011July 15, 2018 ~ Monika ~ Leave a comment

the Beauty of Humanity Movement by Camilla Gibb (2010) 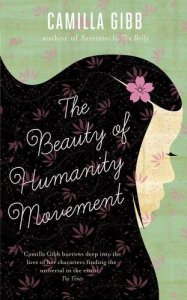 Maggie is in Hanoi looking for clues about her father who never followed her and her mother to the US during the American war in Vietnam. Her father was an artist who was sent to re-education camp for publishing anti-Communist propaganda. After a year of searching for any memories of her father, she finally meets an old pho-seller, Hung, who remembers him.

Meeting Maggie forces Hung to remember a lot of things he has been trying to forget. Dao, the editor of the illegal magazines being published at Hung’s shop, was sent to a re-education camp and never came back. Hung has been taken care of Dao’s son and now it is Dao’s son and grandson who take care of Hung. And then there Lan, the old spinster who has been living next to Hung all her life and is the love of his life, but they haven’t spoken for 45 years.

Camilla Gibb’s three previous books are high up on my list of favourite books, and especially Mouthing the Words. But when I finished this book, all I thought was was this all? Yes, the story is good and it gives a great insight to a state I know little about. But I never really connected with the story and I felt that it barely scratched the surface of what could be a really great book.

“And 1770 was the year that my great-great-grandfather was born, Michael tells the class. David Thompson, the greatest land geographer who ever lived, and in the tradition of greatness, a man who died in poverty and obscurity. He was a genius, both intuitive and scientific, largely self-taught, the Mozart of the plains. Driver by some inner force that is difficult to define, he mapped western Canada. It was a solitary passion. What was his contribution? He helped create your world, the one you are now living in, with its Levi’s, Ford pickups, longing, hormones, fear, and the exquisite boredom of this particular moment.”

Michael Mountain Horse is the illegitimate half-Indian great-great-grandson of David Thompson, a man who mapped western Canada. He teaches history at a high school when one of his students is in a car accident and goes into a coma. Michael visits him at the hospital and tells him what he is missing out on in class. This turns out to become the family history of Michael, going from David Thompson in Wales, all over Canada and Michael’s own experiences in World War I and the Spanish civil war.

This is a great book spanning over many centuries and the history of Canada. I really enjoyed Michael’s own story, but felt that the story of David Thompson lacked some personality and was mainly describing his adventure. I really enjoyed the 1900s, and especially the narrative of Mackenzie King, the Prime Minister of Canada in this period who consulted mediums and admired the German nation-building prior to World War II.

June 8, 2010 ~ Monika ~ 3 Comments
the Robber Bride by Margaret Atwood (1993)
A woman, Zenia, who they buried, is seen in broad daylight. None of the 3 friends, Tony, Roz and Charis, are surprised by this. Zenia was after all the face of all evil. She had stolen all of their men, and two of them never came back. Why has she come back? The story goes backwards in time to the time Zenia weaselled her way into their hearts and homes. Zenia is a master of lies, she tells different stories to different people and they all believe her.

The 3 women are very different. Tony is the history geek with a love for war and battles, Charis is new-age and seeing auras, while Roz is the career woman. The thing that brought them together was their hatred for Zenia. The women are strong, the men are weak.

This book didn’t capture me as much as the other books of Atwood. But it was a good read.

March 19, 2010 ~ Monika ~ Leave a comment
the English Patient by Michael Ondaatje (1992)
A Canadian nurse is alone with a nameless patient in a deserted Italian village at the end of WWII. The patient (English?) remembers every grain of the Saharan desert and what happened there but that is all he talks about. The girl is in love with the patient. A man, a former thief, who turns out to be a long lost friend of the girl turns up after hearing a strange rumour. And then an Indian sapper in the British Army shows up, disarming mines where he finds them. Then the girl falls for the Indian and they become lovers. Meanwhile, the former thief is trying to find out who the patient is, making him talk while being on morphine. Within the story there are stories about their past lives.

I think this is the first time I have been offended by the word fuck. It didn’t fit in with the beautiful sentences and descriptions. It was a book I read in between classes and waiting for my sister at Schipol. It was also a book that made me want to read other books to get more knowledge about the war and mapping the deserts. And I can’t wait to find out what the 5th graders make out of this book.

Friendships that turn into cruelties. It’s one of those stories that haunts you when you’re not reading it. I saw a lot of my own childhood in this book and it reminded me about all those things I have been trying to forget.
“This is what I miss, Cordelia: not something that’s gone, but something that will never happen. Two old women giggling over their tea”. 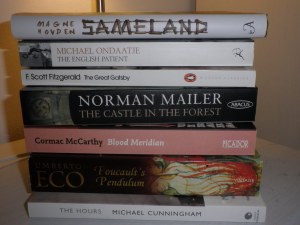 These are the books that have found my way recently.
(I find it hard to write about the things I really love.)