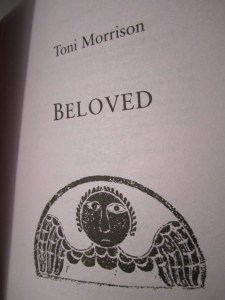 “124 was spiteful. Full of a baby’s venom. The women in the house knew it and so did the children. For years each put up with the spite in his own way, but by 1873 Sethe and her daughter Denver were its only victims. The grandmother, Baby Suggs, was dead, and the sons, Howard and Buglar, had run away by the time they were thirteen years old – as soon as merely looking in a mirror shattered it (that was the signal for Buglar); as soon as two tiny hand prints appeared in the cake (that was it for Howard). Neither boy waited to see more; another kettleful of chickpeas smoking in heap on the floor; soda crackers crumbled and strewn in a line next to the doorsill. Nor did they wait for one of the relief periods; the weeks, months even, when nothing was disturbed.”

Sethe, a runaway slave girl, kills her eldest baby girl, Beloved, when her owner comes looking for her. Beloved haunts the house until a day when a former slave, who knew Sethe from a farm, chases the ghost away. A few weeks later, a beautiful girl, turns up at the house, claiming she is Beloved.

The story changes between present and past, and thus gives a good insight in the lives of slaves at the time of the American Civil War. The language reminded me a lot of William Faulkner, though a lot easier to follow. Such a sad and violent tale. I will definitely read more by Toni Morrison, who got the Nobel Prize for Literature in 1993.

“Could she sing? (Was it nice to hear when she did?) Was she pretty? Was she a good friend? Could she have been a loving mother? A faithful wife? Have I got a sister and does she favor me? If my mother knew me would she like me?”