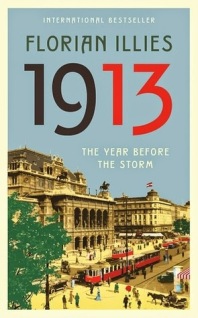 1913; The year before the Great War. Hitler, Stalin and Tito are once at the same time in Austria. Franz Kafka is hopelessly in love and writes countless letters to his object of desire. Freud and Jung argue about psychology while the stunning Alma runs from artist to artist. Do they have any idea of what is coming? Written in monthly instalments, we follow a bunch of famous people through 1913.

The notes are interesting, funny and thought-provoking.  Especially those which involve things that are to come, like a Leonardo DiCaprio reference when talking about Titanic. The book is also interesting because we know what will happen. But I didn’t really get to truly enjoy it as I had no idea who most of the characters are. Although I understand the point of just following the characters through the year, I wish there would be some sort of summary or conclusion. Read it if you’re interested in cultural history, drop it if you’re not.