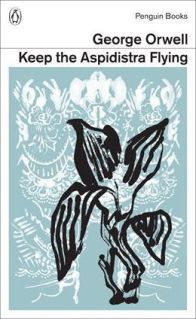 “Their combined ages were two hundred and sixty-three years. None of them had ever been out of England, fought in a war, been in prison, ridden a horse, travelled in an aeroplane, got married, or given birth to a child. There seemed no reason why they should not continue in the same style until they died. Year in, year out, nothing ever happened in the Comstock family.”
Gordon hates money so much that he left his good job and started working for a small book shop. At night he writes poetry while glaring at the hated aspidistra on his shelf in his rented room. And always thinking about money and the fact that he is too poor to do anything.

So goes his life, until one day when he receives a letter and a cheque for 10 pounds from an American magazine that will publish one of his poems. He is going to give half of it to his sister who has always given him a hand, but first he is finally going to invite his girlfriend and a friend out to dinner. But the perfect night turns into a drunken stupor that ends in jail.

Orwell is a master in portraying the life on the dirty, poor streets of London. And as in all of his novels, the political aspect is close to the surface. Although Gordon is a miserable character, Orwell writes with an excellent sense of humour, and it is hard to feel sorry for  Gordon as he can only blame himself for his position. After all, the war against money is a battle that he is doomed to lose. The way the book ends is another plus, although I predicted it.

This was the remaining Orwell novel on my shelf, and that is a little sad. But he has written some very interesting non-fiction books, so I have something to look forward to. If you have only read Animal Farm and 1984, I highly recommend his other works.

5 thoughts on “all the lonely people, where do they all belong?”