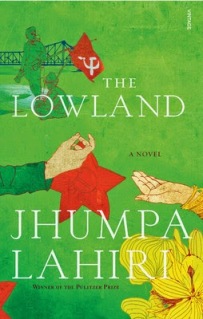 “But he was no longer in Tollygunge. He had stepped out of it as he had stepped so many mornings out of his dreams, its reality and its particular logic rendered meaningless in the light of day. The difference was so extreme that he could not accommodate the two places together in his mind. In this enormous new country, there seemed to be nowhere for the old to reside. There was nothing to link them; he was the sole link. Here life ceased to obstruct or assault him. Here was a place where humanity was not always pushing, rushing, running as if with a fire at its back.”
Subhash and Udayan Mitra are brothers, growing up in Calcutta. While Subhash has an academic mind, Udayan is fascinated by the Naxalite movement, which wants Communist rule in India. Subhash moves to Rhode Island to continue his education, Udayan stays behind and gets more active in illegal activities, but also marries a girl without his parents consent.

The police are rounding up the members of the Naxalite movement, and one day they are coming to the Mitra household. After capturing Udayan, they murder him in front of his parents and wife. Returned for the funeral, Subhash learns that Udayan’s wife, Gauri, is pregnant. He decides to marry her and bring her back to Rhode Island.

The themes of the book are interesting, and I enjoyed reading it. But towards the end, the book felt too long and especially the last chapters seemed unnecessary. Jhumpa Lahiri has an interesting voice, and I will definitely read more by her.

Having read all the shortlisted works for Man Booker Prize 2013, I have to say that although I enjoyed the winner; the Luminaries by Eleanor Catton, my favourite is Harvest by Jim Crace.