Skip to content
the Testament of Mary by Colm Tóibín (2012) 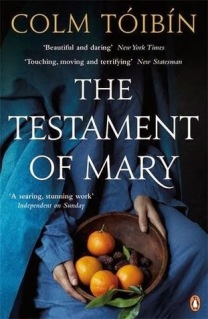 Mary, the mother of the man who died on the cross and then resurrected, is interviewed by two men about the event. As Mary tells them her version, her mind wanders, and she lets us in on her secret.

When her son starts to gather a band of misfits, as Mary calls them, she is concerned about her son’s safety. She knows that the Romans aren’t fans of rebels. Her son is performing miracles, like waking Lazarus up from the dead. She is at the same party as her son, and she tries to warn him, but he won’t listen to her. And then he is seized and the rest is history. But which version is the correct one?

How do you picture Mary, the most famous mother of them all? Colm Tóibín makes her a mother of a rebellious child who then gets killed. She’s angry all right, but she is also sad. And it seems like she’s angry at her son for not listening to her.

It’s a good book, and it certainly makes you think. It’s certainly well-written, but yet I feel that it’s missing something, but I can’t put my finger on it. Maybe I want more memories from his childhood, or what happens later in her life. Read it if you are interested in religion, pass on it if you’re not interested.