the Year of the Flood by Margaret Atwood (2009) 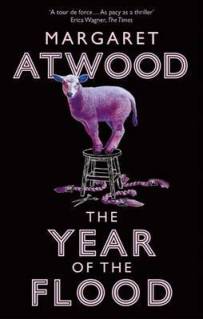 “As the first heat hits, mist rises from among the swath of trees between her and the derelict city. The air smells faintly of burning, a smell of caramel and tar and rancid barbecues, and the ashy but greasy smell of a garbage-dump fire after it’s been raining. The abandoned towers in the distance are like the coral of an ancient reef – bleached and colourless, devoid of life. There is still life, however. Birds chirp; sparrows, they must be. Their small voices are clear and sharp, nails on glass: there’s no longer any sound of traffic to drown them out. Do they notice the quietness, the absence of motors? If so, are they happier?”

Year 25 in the Gardeners’ calendar; the year of the waterless flood. The year which wiped out most of the human race. Toby is a survival at a spa, where she lives off the organic food and the rooftop garden. Another survivor is Ren, who has been locked in an isolated room at the sex shop where she works as it is suspected that she is unclean. Both women have been members of the Gardeners – a religious eco-cult.

This is the second book in the MaddAddam-trilogy, and it’s almost a decade since I read the first book, Oryx and Crake, which I barely remember, but remember as difficult to grasp until the end. And that’s probably why it has taken so long before I started on this one (and because the final book has just been published). the Year of the Flood is a lot more easier to read. I‘m really curious about how the trilogy is going to end. But first I’m going to reread Oryx and Crake.