the Honorary Consul by Graham Greene (1973) 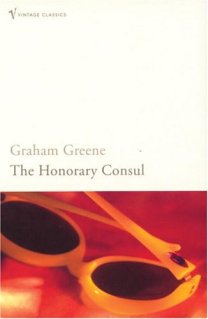 Charley Fortnum is the Honorary Consul in a small northern Argentinian town. He is old enough to entire, a heavy drinker and an embarrassment to the British Foreign Office. The small town has only two more Englishmen, Dr. Humphries, an English teacher, and Dr. Eduardo Parr, a real doctor. Dr Parr is half English and half Paraguayan, his father was too involved with politics in Paraguay and sent Eduardo and his mother across the border to Argentina. Eduardo hasn’t seen his father since then, and has no idea if he is dead or alive, or a political prisoner.
It is the politics which will cause problems for both the Consul and Eduardo. A group of revolutionists makes an error and kidnaps the Honorary Consul instead of the American Ambassador. And as the kidnappers manage to hurt the Consul in the affair, Dr Parr must get involved.
Another great book by Graham Greene. I enjoyed it more than Our Man in Havana, mainly because this book has more developed characters. I felt that I really got to know them. Greene is also an expert on painting the perfect picture of expat-life in South-America. The progress of the story is also very good, and the ending was not what I expected. I’m glad I have more Graham Greene to explore!