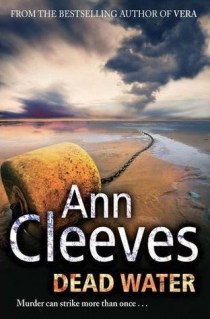 Shetland’s Procurator Fiscal, Rhona Laing finds a dead journalist in the yoal her rowing team uses. The journalist has been hit in the head, but the yoal is clearly not the crime scene. Why was the journalist killed and is it a coincidence that he was put in the yoal?

Jimmy Perez is still, six months later, on sick leave after his fiancée was murdered and is just occasionally in the office, so Sandy Wilson is in charge. He, and the new SIO from Edinburgh, Willow Reeves, want him to join in on the case, but Jimmy is reluctant. But as he sees the investigation getting no where, he starts doing research on his own which pisses off the SIO. But there are few evidences to go by, so will the case ever be solved?

It was nice to revisit Shetland and getting to meet Jimmy Perez again, although the last book could have been the final one. I’m not a fan of endless crime series, so I was sceptical to this at first, but then I just had to know if Jimmy still was there, so I pre-ordered to my Kindle once I found out it was due.

In the beginning Jimmy’s personal and emotional life played their roles in the story, but as the story progressed, the focus shifted more to the case and I wish the personal level would be deeper. I also felt that the end was rushed, and it was hard to get a clear picture. But I really enjoyed the character of Willow Reeves, and I hope that she will continue to show up as I assume this won’t be the final book about Shetland. I also love how much Shetland itself is a big character. And as always, I never guessed the murderer.