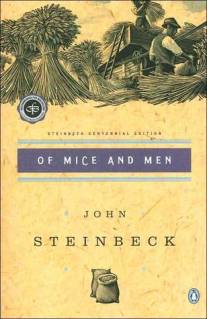 Lennie and George are travelling around California, looking for work at farms. Lennie isn’t quite right in the head, and George promised that he would look after him after Lennie’s aunt died. Lennie’s favourite thing is to hear George talking about the small farm they’re going to have once they have worked hard and saved up enough money. Lennie has a particular soft spot for everything beautiful and things that are nice to touch, like puppies, mice and dresses, which has got him in trouble before.

When they are approaching the new farm, George orders Lennie to not speak so there won’t be any trouble. The farmer is suspicious, but he gives them a chance when George ensures him that Lennie might be dumb, but he is excellent at following orders. The trouble is that the farmer’s son disliked the big dumb Lennie and he tries his best to make sure that Lennie messes it up.

Of Mice and Men is a short story, but it is sure one that takes time to forget. It has the same setting as the Grapes of Wrath, but this has a lot of humour between the lines, although it deals with serious topics like mental health, racism and poverty. And the end is really mindblowing.

The most intriguing thing I learnt from Wikipedia regarding this book: The character of Lennie Small is used as the standard for legal mental retardation for executing a prisoner in Texas. If a person appears smarter than Lennie Small in an interview then he may be executed. If he does not, then he cannot understand his crime(s).