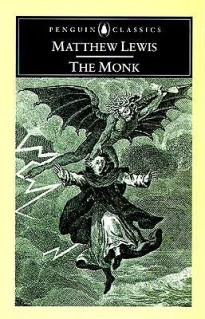 Father Ambrosio is the most popular priest in Madrid because he is so pure. His church is full of people who want to listen to his sermons. His monastery is wall to wall with the St. Claire cloister where the terrible Domina who rules with an iron hand. Lorenzo and his friend Raymond are attending one of Ambrosio’s sermons when they spot a really beautiful young girl, Antonia, and Lorenzo falls head over heels. Lorenzo’s sister, Agnes, is at the St. Claire cloister and she has a secret relationship with Raymond. But the relationship is found out on the same day that Father Ambrosio discovers that one of his favourite monks happens to be a female.

Mathilda is the monk’s real name and she has been in love with Ambrosio for ever. She manages to corrupt his innocence which leads Ambrosio down a path of destruction which includes rape, sorcery and murder and eventually a meeting with the Devil himself.

Once you get through those first hard chapters (why is it always so with the classics), this is a hilarious account of the corruption of the Church. There is so much more to the story than the life in the cloister; a good dose of the old fashioned tales about damsels in distress and quite a lot of sex and ghosts. Just the perfect end of the year read I needed.

This was the final book this year in Line’s 1001 books reading challenge.

One thought on “sixty-four.”