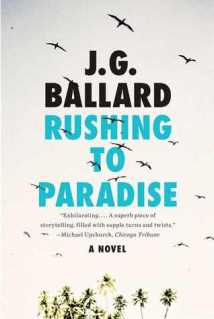 The 16 year old Neil is drawn to the eccentric and charismatic Dr Barbara who is rallying to save the albatrosses on the French island of St Esprit.They are joined by an Hawaiian native, Kimo and they launch an attack on the island. And thanks to Neil being shot, they receive world wide attention and sympathy and the French leave the island for them to establish a sanctuary for all endangered species. But paradise is not what it seems.
I’m afraid I had high expectations for this one as J.G Ballard is the author of amazing books like Crash and Empire of the Sun. But this really disappointed. Rushing in the title might as well point to the fact that the story is really rushed. The plot is simply too big for the story and although it’s a great idea for a story, it’s just too much. And there are even some severe holes in the plot, especially regarding Neil’s naivety and suspicions. Even the sex, which Ballard usually is great at describing, is tame and full of clichés.
I need to soon read another Ballard story, and a good one, to get over the disappointment of reading this one.