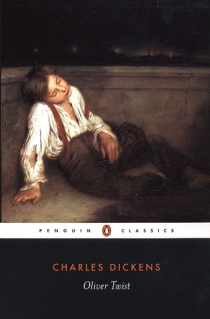 Oliver Twist is an orphan after his mother died while giving birth and his father is unknown. He spends his childhood on a farm, then in a workhouse and then he is sent to a coffin maker as an apprentice when he is 10 because he dared to ask for more food at the workhouse. He eventually runs away to London where he finds himself amongst thieves and rogues.
Third Dickens in a little over a month and finally one that I truly enjoyed! Poor Oliver Twist got me right from the start and held me to the end (although it got boring with all the explanations). I really enjoyed the street life of London and the gang that Oliver ran into; Fagin, the Artful Dodger and Nancy. They do not treat Oliver very well, but the adults have their own reason for keeping Oliver in the gang and try to find him every time he gets away from them. He is twice taken in by good people and they believe that he is innocent and want to help him get his life in order.
Having read excerpts from the novel previously, I’m glad that I got to read the whole book or else I would just thought that the book was about Oliver living on the streets. We are currently watching the 2006 film version by Roman Polanski in class and I find it really true to the story and I love the way the characters are portrayed, they are exactly how I imagined them while reading the book.
Today is the 200th anniversary of Charles Dickens’ birth and I will certainly more Dickens.