Buzz Aldrin, What Happened to You in All the Confusion? by Johan Harstad (2005) 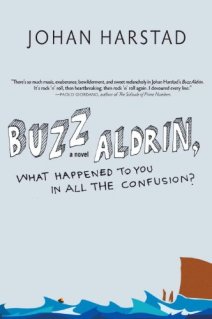 “It takes vast willpower, luck, and skill to be the first. But it takes a gigantic heart to be number two.”

Mattias is happy with his life in 1999; he has a girlfriend, they have been together for 12 years and he works as a gardener and he has a few good friends. And he is going with his best friend’s band to the Faeroe Islands. He is completely satisfied with being a nobody, a number two; just like Buzz Aldrin, his hero. But then, shortly before the trip, he loses his job and the girl leaves him for an other man. The next thing Mattias remembers is waking up in the middle of the road in the middle of nowhere on the Faeroes in soaking rain.

Havstein is the man who saves Mattias. He brings him to his home, which is also a half-way house with four patients. And here Mattias really melts down before slowly starting to recover. The people in the half-way house have all had their own rocky way from and to sanity.

This book is also about so much more than Mattias and the people in the half-way house. It is about astronauts and Buzz Aldrin and the past forty years. Johan Harstad has written such a beautiful portrait of the Faeroes that it has become almost a character itself. I fell in love with the islands. I also cried a good deal while reading, not sure why, but it is sad in a simple and beautiful way.